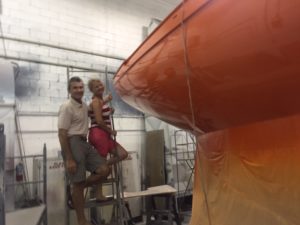 Well, summer passed by and Puffin has gotten her seaworthy boat look back. And the fall is about changing colors, right? Grey was the last color in Part 4, and it was that of the strongest primer I have ever sanded (Alexseal, of course). But this was a good sign, this time. 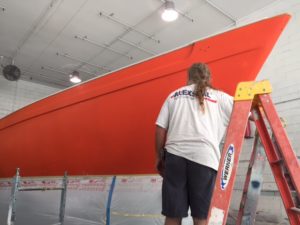 Glenn changing logos from Sea Hawk to Alexseal, depending on the job at hand

I wanted International Orange for the topside, mainly for practical reasons. Potential collision with freighters is the second greatest danger in my book while you are offshore (particularly for a single-hander)… And since I spent 13 years in the merchant marine, I am well aware of the increasingly slacking discipline, low morale, and disappointing lookouts present on commercial ships. Obviously I want to be very visible in the middle of the ocean, and the popular navy blue or white hull colors blend perfectly into the waves. Also, dark hull colors boil their crew in the tropics.

Alastair, my main contact with Alexseal, also sent me yellow topcoat, since the orange does not cover the grey primer properly. Well, that meant more coats, which is good on the protection side, but also means more sanding, of course… Surprisingly, I liked the yellow first. But we kept going. After 2 coats of yellow, Glenn sprayed the final 3 coats of orange, on September 8. 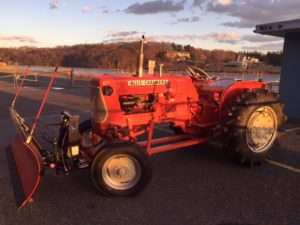 It took a while to get used to the new color, but our relationship with Artie, the Assistant Boatyard Manager at Seawanhaka, jumped to a higher level when he proudly showed me the picture of his classic collectible tractor with the same orange color. 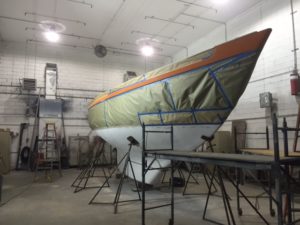 Puffin’s topside gets protective wrapping before the other paint jobs

Anyway, I did not get the chance to enjoy the new color, since we had to wrap it into protecting paper to avoid any overspray from the cove stripe, bottom paint, and deck paint. The next target stage was Sea Hawk territory, putting their famous Tuff Stuff (epoxy primer) and at least 1 coat of their best ablative antifouling on the bottom. 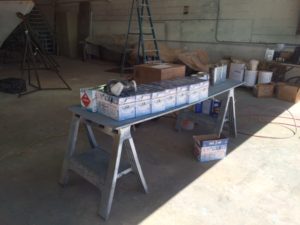 All of this is supposed to be on the bottom

This needed prep, of course, and I was shorthanded once again since my helper, Janos, flew home on September 12. Our progress became slower, but I had enough time to spare since Mark Andres, the Sea Hawk rep, wanted to witness this process, and was committed to attending the Newport Boat Show. I removed the skirt from the bottom and sanded it, again with 80 grit as Mark advised. 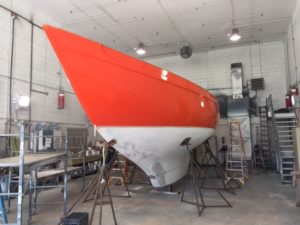 Finally we got the new waterline!

Determining the right waterline has always been tricky. The best method is to launch the boat and find the scum line after a couple days of soaking in the water. I had saved the measurements from the previous waterline, but the new one will be higher due to the hull reinforcement (which adds at least 1000 pounds of extra weight) and 1 year’s provisioning for the race inside the boat. My 4“ lift on the waterline might not be enough; we shall see…

The next difficulty is the beamy hull. The boat’s name—Puffin—is very fitting regarding her belly shape, and that makes it even more difficult to eyeball the waterline. It took several hours and serious input from the boatyard staff to achieve satisfactory results. 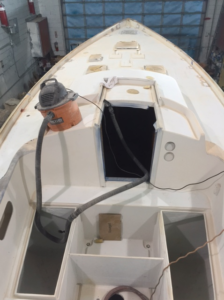 Prep for the deck paint job

I rotated my work stages in the next few days while Mark was in Newport. I started a never-ending vacuuming inside the boat, which looked like the inside of a never-cleaned Hoover after several years of constant use. I also continued prepping the deck for its paint job. 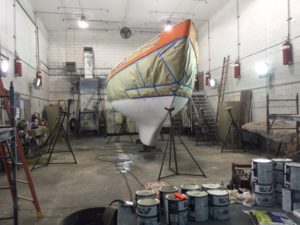 Prep for the bottom job 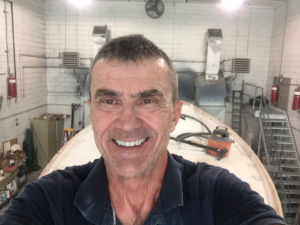 A forced smile to celebrate another Sunday working overtime

I was ready for the bottom and deck prep by Sunday evening, and accomplished other smaller but vitally important tasks like refilling the engine oil that I had pumped out before the hull lamination, etc. 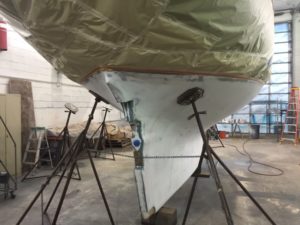 Leaving only the most necessary jack stands in place

The bottom finally got done on September 19. Glenn sprayed 3 coats of grey Tuff Stuff on the bottom and 1 coat of blue Sea Hawk’s top ranking ablative antifouling while the primer was still tacky.

To be continued in Part 6… 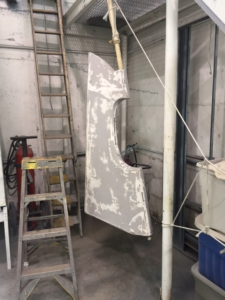 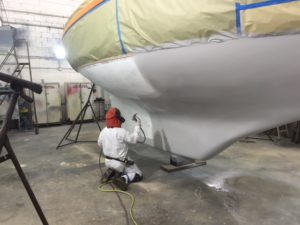 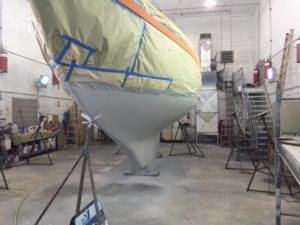 Tuff Stuff primer is on 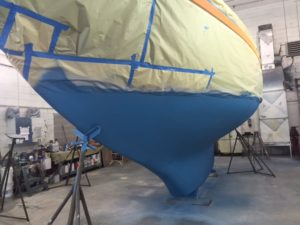 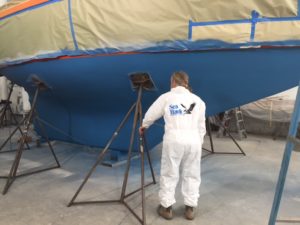 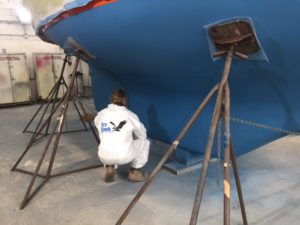