In 1968, the Sunday Times Golden Globe Race set up the ultimate challenge: the winner would become the first person ever to sail solo around the world without a single stop. Of the nine skippers who started, only one successfully completed the race: Britain’s Robin Knox-Johnston. The outcome proved what an incredible feat Knox-Johnston had achieved, and he earned his place in the record books for all time. 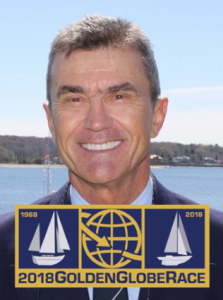 On April 22, 2015, Don McIntyre announced to the world that he would be creating a truly one-of-a-kind international sailing race. In honor of the 50th anniversary of the first Golden Globe Race, he thought, why not resurrect a race of such high caliber and intensity? In McIntyre’s mind, there was only one way to do so. Not only would all entrants have to sail solo around the world without stopping, but they would also be restricted to the same level of equipment and technology used by Knox-Johnston in 1968! And so the 2018 Golden Globe Race was first conceived. McIntyre’s dream is to reintroduce a race that truly pits the skipper against the ocean, without the interference of modern technology and conveniences.

On August 1, 2015, Istvan Kopar was announced as one of the first confirmed provisional entrants. By the end of the year, there were 30 confirmed entrants, and 150 more interested applicants! Only the most elite sailors in the world have been accepted into this prestigious competition. Each entrant is required to log at least 8,000 miles of ocean sailing experience, and 2,000 miles of solo sailing, by March 1, 2018. Fortunately for Istvan, he met both of these marks many years ago. Entrants have strict guidelines for what kind of boat they can use, what modifications they are allowed to make, and what equipment they can bring with them. Istvan has already obtained the boat he will be racing in, a Tradewind 35 called Puffin, and his preparations are underway. The race will start in Falmouth, UK, in June 2018, and is expected to take more than 300 days to complete. Continue to follow us here for exciting news and updates!