Puffin in the GGR, Part 1a: The Chaotic Final Prep Months

As I write this I am sitting behind Puffin’s salon table, not in the boat but in our new (downsized) home. Golden Globe Race rules allowed the entrants to leave the salon table behind, so it stayed in the U.S. I will be sending it to Ian, the new owner of Puffin, but there is no rush on either side, since Puffin is a GGR entrant again for the 2022 race.

It is somehow comforting to write on a table that belonged to the top priority of my life over the last 5 years. I need this tangible help in writing, since my last GGR-related blog was posted on June 21, more than 6 months ago. I have my excuses for the long break, but I still feel bad for the delay of my earlier promise. 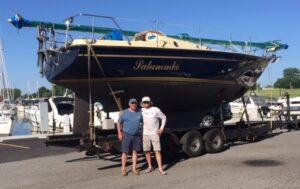 I was without a boat for just a couple of months before I was luckily able to reunite with my first solo circumnavigator yacht, Salammbo. However, shipping her back to her birthplace (Lake Balaton, Hungary) took more than 3 months. It was early fall already when I was finally able to sail her on the lake.

But the major detour that kept me distracted from my GGR blog writing was a special project, my father’s hereditament. My dad was born at Lake Balaton, and ran her major nautical company for a decade as the CEO of Lake Shipping Company. We both fell in love with sailing and the lake at the same time, in our childhood. 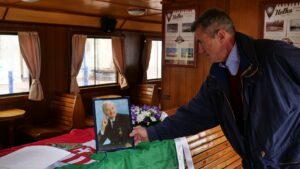 The lake is a sizable body of water by European standards (77 km/47.8 mi long), but very shallow (average depth 3.5 m/11.5 ft). Consequently, her water is very fragile both in quality and quantity. There is a natural filling-up process, so she must be constantly dredged. But there is no more available space for the dredged material around the lake. 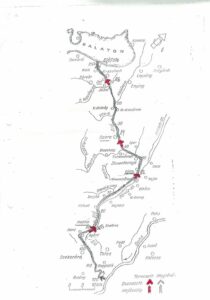 The Sio Canal, originally built by the Romans, connects the lake with the Danube River. But it is only navigable part of the year with the benefit of surplus precipitation in the lake (the level difference between the lake and the river is 16 meters). My dad created a plan to construct dams and locks to make the canal navigable year-round, which would make the necessary barge transport of the dredged mud possible. He fought for the execution of this plan over the last 2 decades of his life. Unfortunately the short-sighted, self-serving politicians did not welcome this longterm national project. I have been trying to carry on this torch to save the lake (the leftover Hungarian Sea), and using my blue water achievements for its marketing.

Just to give a push to this mega project, I came up with the idea of aiming for my 4th circumnavigation, if the canal would be navigable. In this case I would be able to depart from Lake Balaton—where Salammbo is berthed now—getting to the Black Sea via the Sio Canal and Danube River. The plan is to sail solo, nonstop, and westbound, the “wrong way,” this time. The most difficult part is making the canal navigable, because it’s not a solo project, needless to say! 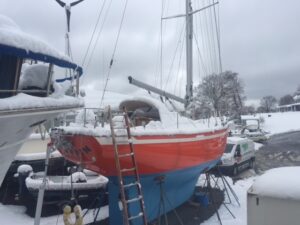 The late winter had its peak during the spring of 2018, in NY

Life indeed became hectic and heavily overloaded in the last period of my race prep. The winter started late in New York in 2018, and was at its peak in March and April. The most significant financial support did not arrive until the last minute, unfortunately, when sponsors and big donors recognized that my departure was definitely happening, and on the near horizon. Consequently, all the expensive equipment—HF radio, YB tracker, satellite phones, EPIRBs, radar transponder, wind generator, solar panel, etc.—was ordered late. 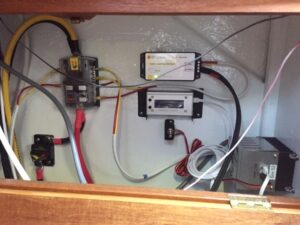 The “brain” of the various generators (wind, sun, and hydro) 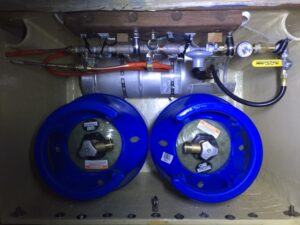 The snow and cold also did not help in the rush of installation and provisioning of the boat for a year at sea. I had to divide my attention and workload between Puffin’s departure prep and moving to our new, downsized home in Florida (which financed my GGR entry). And Puffin was still 1300 miles away in New York! The 24- to 30-hour drives (with U-Haul trailers) might be considered good training for solo sailing, but they were dangerous, too, due to the overworked, exhausted driver. 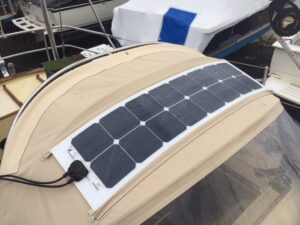 The new dodger and solar panel, thanks to my donors 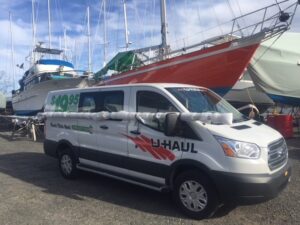 My favorite transporter between Florida & New York, but the Selden spinnaker pole did not fit in

Seawanhaka Yacht Club has a mooring field, not a marina. Boats can dock at the service dock for provisioning, fueling, or repair, but only in good weather. I had to challenge the rules and the weather to have a shorter commute to the boat, but luck was not on my side from the beginning. 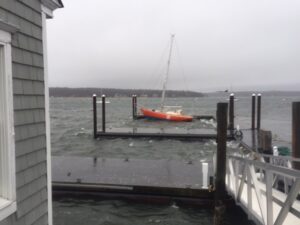 The floating dock that almost crushed Puffin before the departure

The worst easterly that we have had in the last decade almost crushed Puffin. The boat was tied in the horseshoe part of the dock and got trapped there for the night, not able to escape for a safe mooring alone. The floating dock got constantly flooded by the waves. I had to crawl on it to avoid being blown away by the wind and the waves while I was making a cobweb of docking lines around Puffin. The heavily-loaded Puffin proved too much for the floating dock in this serious storm and started to break its connections. Luckily, I had miles of heavy lines and chains to tie them together.

By 3am on Sunday—completely exhausted, wet and cold—I phoned my team manager Ian for help. We took shifts to guard the lines for chafing while directing the headlights of our cars, which served as shelter from the pouring rain.

When daylight arrived, we gathered enough hands to team up and make a very risky maneuver swinging Puffin alongside the wing dock pointing into the weather. Luckily, we missed the main dock with the wind vane by barely an inch, and survived with only light scratches on the hull.

But the weather did not improve, and the fight was far from over. Puffin was jumping up and down alongside the dock, butchering it with her 12 tons. I had to stay around for another night readjusting the dock lines and fenders. The biggest danger was the wing dock separating and dragging Puffin with it towards the beach. I geared up a RIB with the largest anchor I could carry and deployed the anchor 400’ weather-bound, attaching its rode to Puffin’s windlass. Gradually easing the dock lines afterwards gave a significant slack for the dock.

By Monday morning the weather improved, and with the help of the boatyard crew we moved Puffin onto a mooring. There was no damage on the boat, but the planned UK-bound departure had to be rescheduled again. 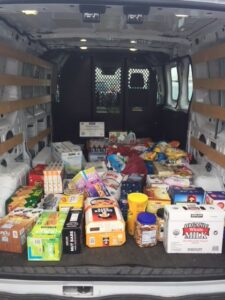 Local shopping for the ocean crossing before the race start 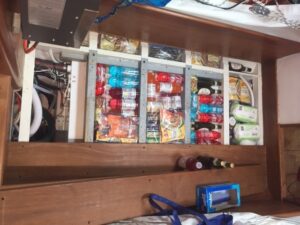 My emergency supply gets hidden under the secured floorboards

My days turned into complete madness due to the lack of time and money. Not only was I still working on Puffin (dodger, lazy jack, etc.) and running GGR-related errands—like the medical exam report and all kind of certifications—but I also had to empty my residence and pass my car to my older daughter. These demands on my time turned Puffin’s provisioning into chaos. I was not able to make rational calculations, and had to settle for overloading her, hoping to get rid of the surplus in Europe before the start. 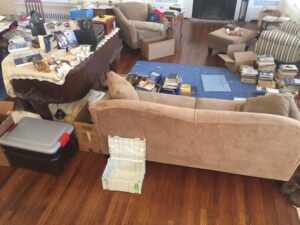 Another challenge: selecting the books to bring along for a year at sea

And the last major requirement and expense, Puffin’s insurance, was still missing! Thankfully divine intervention sent me Ragnar, a real Viking (but with a generous checkbook rather than a sax). Thanks to him and so many others, Puffin was able to cast off from her mooring April 29 at 10:30am.

Puffin never got the chance to have a shakedown cruise after her restoration, so my team manager Ian volunteered to sail with me until Bermuda. Well it was a prudent thing to do, but not fun for either of us. The weather was rough and cold at the beginning. Then a lot of countercurrent slowed us down later. 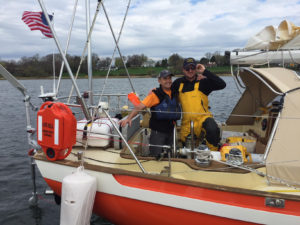 Istvan and Ian preparing to depart for Bermuda

We got to Bermuda on May 5 at 8am, and Ian left Puffin for his NY-bound return flight at noon. My solo Atlantic crossing did not look too promising. The two expensive satellite phones both did not work, the HF radio was still untested and had no HAM counterpart, and the Windpilot wind vane did not work reliably.