If—
“…If you can force your heart and nerve and sinew
To serve your turn long after they are gone,
And so hold on when there is nothing in you
Except the Will which says to them: ‘Hold on!’…”
—Rudyard Kipling

The opening of my first book features Kipling’s complete poem, which has been the main compass of my life. But the lines above have been the prevailing ones in the last couple of months, for sure. Puffin‘s restoration/race outfit has become overwhelming, and I have been forced to change my schedule and plans. I have not yet landed financial sponsors, and my single-handed labor and finances have failed to keep up with my original plans. My goal was to sail to the UK this fall, since an English friend offered a free slip for Puffin in Southampton. But Puffin is still on land, and not ready yet.

“Well, I will be at the start in June, but cannot enter the race. I will just sail parallel with the fleet as an outsider,” I told my wife. “I can’t afford the life raft and safety gear necessary to comply with all the race-related requirements.”

A very determined “No” was my wife’s answer: “You have to be in the race. We sold our house to make this possible, and you will be an official entrant.”

“What a wife!” you would say, without even knowing her previous experience with her first husband. He convinced her to sell her gorgeous apartment for a 51′ Privilege Catamaran, which he sailed to the Caribbean and disappeared with. And now she is willing to sacrifice her second home for another crazy husband… Well, I am blessed with my WIFE, for sure! Yes, there may be no financial sponsors, but there are supportive family, friends, and God!

I replaced the holding tank with a customized stainless steel freshwater tank, but that altered the level of the floorboards. This change ruined the companionway exit, which was designed to the original dimensions.

My prop shaft’s diameter is metric (30 mm), but the end thread is by U.S. Standards, so my new prop end nut is not compatible.

The engine is finally running after an expensive reconstruction of the fuel injection pump, but the alternator does not charge, and the Bukh control panel is playing tricks with its gauges.

I have to change and customize everything, from the battery storage to the mast base, and the list is increasing daily…

“Hold on!” says Kipling, but I am getting exhausted…

Then my wife says, “Hold on!”, and my friends, too! The real ones actually come and work on Puffin, or support me with tangible things from a distance.

George Ardo, an old friend of mine since 1970, flew from Calgary with his son, Zoli. Both are highly skilled and experienced carpenters, and they solved all of my wood-related problems on Puffin, including the aforementioned floorboard level change.

Another friend, Lajos Zsolnay, diagnosed Puffin‘s electrical puzzles, and kept me well fed with delicious Hungarian meals while he was around.

So, I can hold on and keep pushing Puffin closer to the water, inch by inch…

Thank you to all of you keeping Puffin‘s momentum alive! 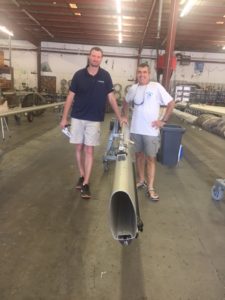 My dream mast has been under construction at Selden US, South Carolina 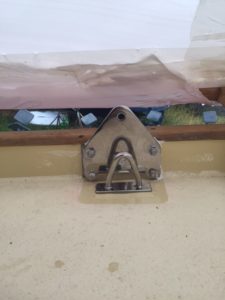 …But it needs additional chainplates… 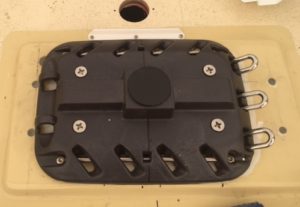 …And a new mast base, of course. 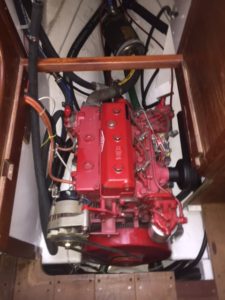 The Bukh engine finally running after the fuel injection pump overhaul, but there are still bugs in the system… 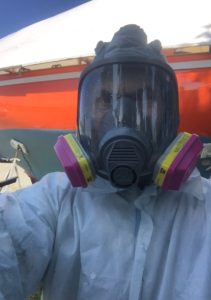 Please, no more sanding!!! But the first coat of antifouling was put on the bottom almost 1 year ago already 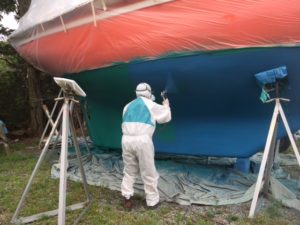 So, Glen can spray on the rest of the coats now 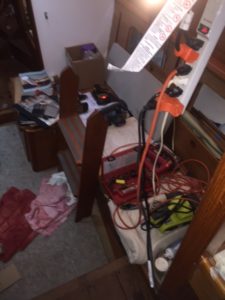 I am still dreaming about a shipshape boat… 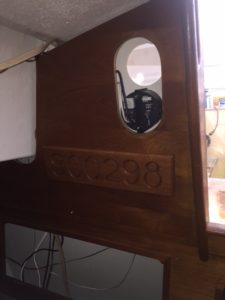 But the USCG Documentation number is in place, at least 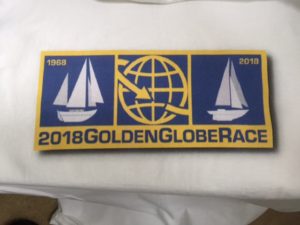 You can order T-shirts now… $25 with signature on it 🙂 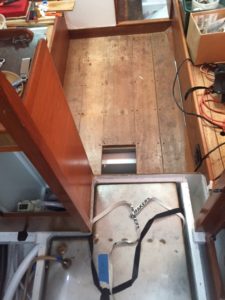 Dry fit for the floor boards 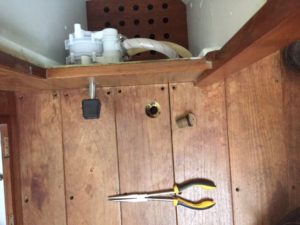 I cut a “dipstick” hole for the new freshwater tank 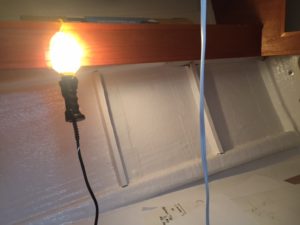 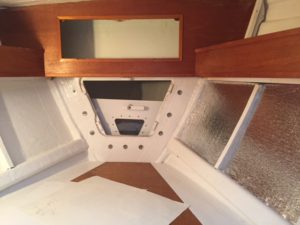 Home Depot is not West Marine, but its prices are far better 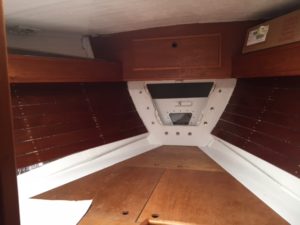 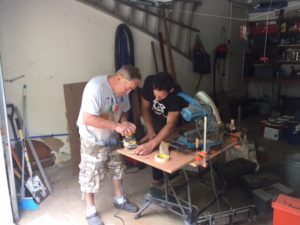 My carpenter friends were promoted to “shipwrights” and tackled another project 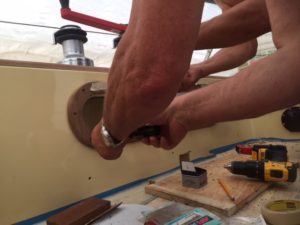 and they play doubleheader in Puffin’s cockpit 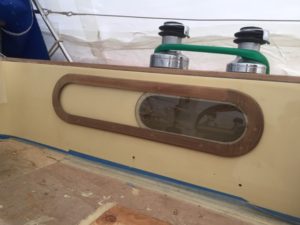 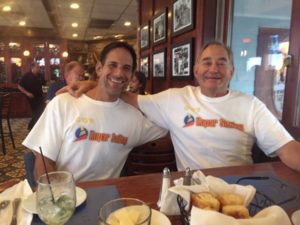 Farewell supper with my carpenter friends 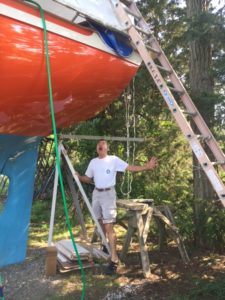 “Gasping for air” below the new estimated waterline… 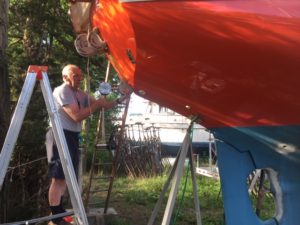 Lajos, my other volunteer helper, is holding the hydrogenerator where it should be. 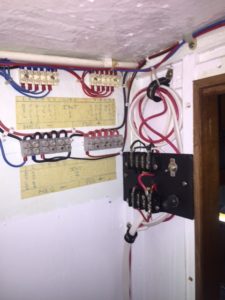 And the electrical system becomes even more complex…