The start of the race is only 164 days away, and there is no time for winter hibernation now! 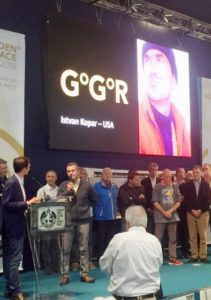 Speaking at the GGR Presentation at the 2017 Paris Boat Show 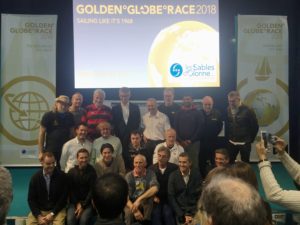 In early December, the Golden Globe Race competitors, team managers, and organizers had their last mandatory meeting before the start in Sables d’Olonne, France. It was a loaded program, topped with a very visible press conference in the middle of the Paris Boat Show. A great deal was made between the race organizers and the conglomerate of Sables d’Olonne, placing the Golden Globe Race into a 4-year cycle from now on, alternating it with the Vendée Globe every 2 years. With this move, Sables d’Olonne has become the world capital of solo offshore sailing, since the current GGR competitors are already from 14 different nations.

We had 30 entrants in 2015, with 10 more on the waiting list. The confirmed number of selected entrants has since dropped to 23.

The Golden Globe Race has several unique features, and has proven to be a challenge of human endurance even during the race preparation. We had 30 entrants in 2015, with 10 more on the waiting list. The confirmed number of selected entrants has since dropped to 23, due to the exhausting boat refit and frustrating sponsor hunt faced by all. But the remaining group looks very determined and steady. We were able to meet each other in person and to admire Antoine Cousot’s boat in the middle of the Paris Boat Show, as well as Jean-Luc Van Den Heede’s boat at the Vendée Globe dock. 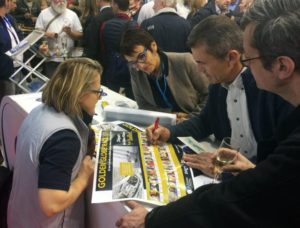 Meeting with GGR fans at the 2017 Paris Boat Show

After the short but dense meeting everyone raced back to his/her home port—particularly Susie Goodall, whose boat was heading towards the London Boat Show. I have followed her yacht’s breathtaking makeover on Facebook, with the very visible conclusion that “Money talks,” since she got the well-deserved and right sponsor. 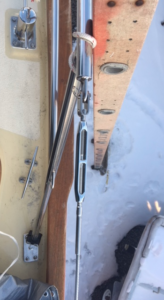 My daily “commute” to Puffin is a vertical one

Racing Back to Puffin

Well, the race is on, and I have to focus on Puffin! Gary Bass, one of my most reliable supporters and hardware manufacturers, finished my compression post fitting. And after 4 days of constant cursing, I was able to install it. I was happy with the final outcome, and the fact that no one else was around while I was working on it. Needless to say, the real test of the reinforced compression post will be out at sea. 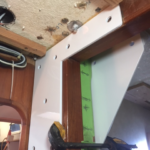 In the meantime, Oyster Bay got frozen in. I have been working on Puffin in a weather-dependent fashion,

alternating my work site between the boat and my computer. We have a lot of administrative type work in order to comply with the race requirements, and I have still been trying to reach out to prospective sponsors and donors. There are also serious deadlines for further payments, like the next upcoming one in February for the mandatory medical kit, with a price tag of £1,500 (approximately $2079 USD). I still do not have a life raft, a wind generator, solar panels, radios, a survival suit, flares, an EPIRB, or proper apparel and provisioning, just to list the most important items.

But Puffin was reborn. and that keeps me moving! 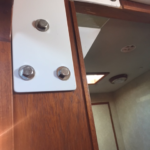 The compression post modification has finally been completed (2 of 2) 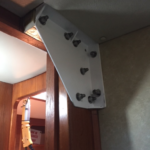 The compression post modification has finally been completed (1 of 2)

By the way, one of the most rewarding aspects of this race, at least for me, is that we are able to save and give new life and purpose to a bunch of abandoned and neglected boats.