Hard to believe it, but we already got the first snow of the season a few days ago in New York, and Puffin is still not fully dressed.

There has been steady progress, of course, but there are so many moving parts, and it is really difficult to make them visible. I got my first Harken shipment: headsail tracks, cars, and the mid-boom traveler with the risers to bridge the cabin top. The deck is bare and has to be dressed up. None of the old holes of the former hardware match with the new ones, of course. And it’s no accident; I like to improve and change stuff.

As I mentioned in an earlier post, I had to relocate the original mainsheet traveler that was in the cockpit, since that area became propane tank storage with extra flotation in case of cockpit flooding. 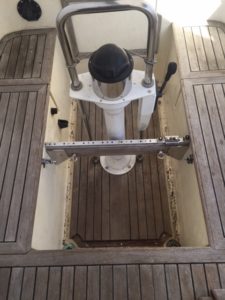 The new Harken traveler is good-looking, heavy-duty stuff, but it adds extra weight to the already beefed up hull. However, it looks strong for sure, and allows much better main sail handling due to its wider wingspan and superior system. The same is true on the genoa/stay sail tracks and cars. 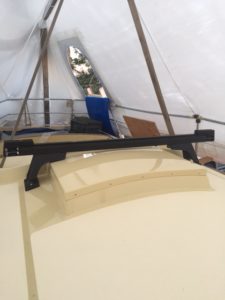 The new Harken traveler, located on top of the cabin due to the new cockpit configuration 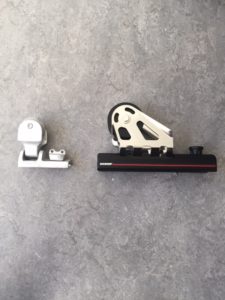 The Genoa car upgrade is quite visible

I spent several days figuring out what to do with the deck cleats. The toe rail-bulwark is 2-4” (depending on its location) higher than the deck level. The original aluminum cleats were low profile, far below the level of the chocks/fairleads installed on the top of the bulwark–toe rail. Finally I reached out to Steve, an English Tradewind owner who has tall (about 5“) bollards (mooring bitts in the US) on his deck, and asked for his feedback. 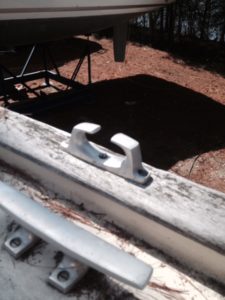 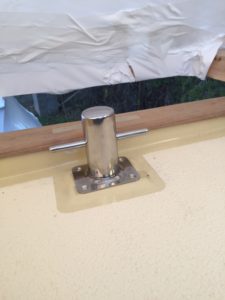 Luckily I found a similar one at Lewis Marine (Ft. Lauderdale) and ordered 4 of them, 2 for the bow and 2 for the stern. But I did not want to use the same thing for the spring lines amidships. I wanted to shoot 2 birds with 1 stone there. I was looking for the combination of a cleat (for the spring line) and a pad eye for the main boom preventer. I spent hours searching in the classic sailing paradises, like Sailorman in Ft Lauderdale and Bacon’s Marine in Annapolis, with no success.

I found a good alternative at Lewis Marine, again. It was manufactured as a stainless steel lifting cleat for tenders, with a ring for the hoist between the horns of the cleat. Needless to say, nothing is perfect if it’s man-made, so I raced with the cleat to my Floridian friend Gary, the owner of Precision Marine, to make stainless steel backing plate receivers for its satisfactory installation. 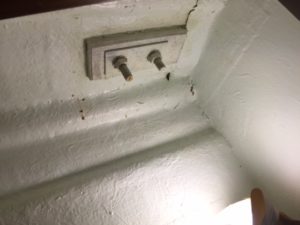 Original backing plates made of plywood 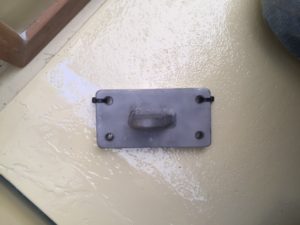 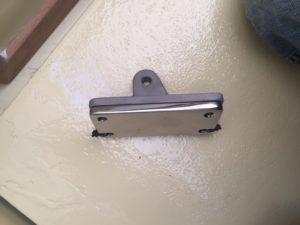 Replacement chainplates for the back stays

Communication and travel along the east coast takes considerable time and money, of course, but gives me the opportunity to get home and catch up with tasks there, too, like removing the shutters on our house after Hurricane Matthew. On the other hand, I get more reasonable deals in Florida than in New York, where the prices graze the sky even higher than the skyscrapers.

The weather was favorable for the outside work in New York this fall, too (I started to strip Puffin last fall), and Artie (my orange color twin buddy, whose tractor was posted with Puffin earlier) suggested focusing on the engine while we could still run it (before the water supply in the yard is shut off for the winter). So I reinstalled the water and exhaust hoses, including the fuel lines on the engine, borrowed a battery, and got a gallon of diesel. Last time we winterized the engine (one year ago), we had to shut it off to prevent it from taking off. It ran wide open and we could not lower its RPM. The fuel injection pump was to blame, but we postponed its haul-out because of other priorities at the time. 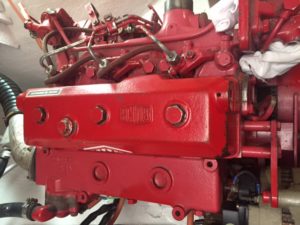 The new troublemaker: the Bukh engine

Puffin’s engine is a 36 HP 3-cylinder Bukh Diesel, which is looking great with low engine hours in spite of its 30 years of age. But I have never gotten the chance to run it (much like the boat itself), and it was sitting on dry land for 10 years. In addition, Bukh is not a regular engine in the pleasure boat sector, so getting an experienced Bukh expert has been pretty difficult, at least in the U.S. Yes, the Danish Bukh is the real marine diesel, not just a marinised one like its cheaper competitors, but as the major supplier of commercial lifeboats they do not kill themselves to be active in the pleasure boat market. They have only 3 dealers in the States. The nearest one, Davis, is in Maryland. Davis has been very helpful, and he gave me the engine manual, which he himself found puzzling even after reading it 3 times. He suggested running the engine for a while to warm it up, hoping for a self-loosening free-up instead of its hasty, amateur removal, which can mess up the engine’s timing.

Well, we ran the engine for more than half an hour with Artie’s constant manual intervention with the shutoff lever, but the injection pump remained stubbornly stuck. We had to give up for now and re-winterize the engine again. Another speed bump in the road…

And there are many of these bumps in the road; life deviates from our plans quite frequently, as we all experience. I got the bad news 2 weeks ago that my Dad had been hospitalized with a major stroke. My daughters purchased my airfare and the older one, the doctor, flew with me to Budapest to help. We came back after my Dad survived the critical first 72 hours and we witnessed his stabilized condition. But recovery at his age (91) looks like a long heartbreaking battle. Yet his spirit gives me hope and keeps me on my chosen track, too.

Here in the U.S. we are celebrating Thanksgiving this week.

Let me express my appreciation and gratitude to my family, first of all my wife Eva, my friends, and my ex–colleagues who are supporting me in this endeavor. Racing solo around the world might mean singlehanded sailing during the event, but the preparation is anything but solo. It’s the work of a huge team whose help, and often sacrifice, is the foundation of any good preparation. Moreover, they will be sailing with me mentally and emotionally, and will be one of my greatest motivations in the race in order to validate their support and to not let them down.

I am grateful to my sponsors and donors who are posted on www.koparsailing.com constantly, but let me name a few whose support was less visible in the previous posts or public displays.

Big thanks to Robert Farrelly, who volunteered to be my Team Manager in the 2018 GGR. He makes my work visible for the followers and other team members. He sacrifices countless hours to maintain and upgrade our website and social media. He is my right-hand man!

A big thank you to the Buffin Family, whose support keeps me within arm’s reach of Puffin, and who help me in many ways, including designing our logo.

Thank you to Sally Moran, my old friend, the owner of Bayside Canvas in Ft. Lauderdale, who donated her time and work in making Puffin’s canvas work (dodger), bunk, seat cushions, and headliners.

Thank you to Roger and Bob, old friends of mine and the owners of Nance-Underwood Rigging in Ft. Lauderdale, for all their rigging related help.

Thank you to Gary Bass, the owner of Precision Marine in Loxahatchee, who is a true artist of marine metal fabrication and manufactured all my chainplates, my crash bulkhead hatch, and all my customized metal fittings, including fuel and water tanks.

Thank you to Diana Russell, a New Yorker friend of mine who gave me the required navigational instruments for the GGR, including a Plath sextant made in 1968, which is the perfect match for the 50th Anniversary Race! 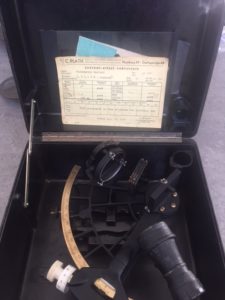 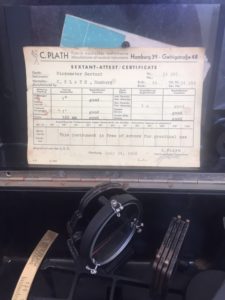 Certificate of the 1968 Plath sextant

Thank you to my old friend, David Hendry in Fort Lauderdale, who hooked me up with Alexseal Yacht Coatings, and to Brad Kleinsasser, who connected me with Sea Hawk Paints. Their help brought tangible results to my frustrating sponsor hunt.

The number of supporters, followers, and fans has been growing day by day, so I apologize if I have no more space this time to name all of them, but thank you!

To be continued in Part 8…