You might think the heavy lifting would be over once the hull has been reinforced and most of the paint job finished… Well, that is actually a misconception comparable to thinking your house would be complete once there were walls and a roof. Yes, the nature of the workload will now change, with less physical stress (like sanding), and less chemical exposure to paints, resin, and dust. But the progress is getting much slower and more time-consuming, and the results less visible. Small projects are good examples—like painting the white cove stripe on the rub rail, or sanding/taping the newly painted deck for the nonskid. I have needed a lot of patience to cope with the reduced pace.

By the way, choosing the right nonskid took several days, and its real ocean test is still yet to come. I did not like the idea of having some nonskid additive mixed into the paint, the way most nonskid paints are made. So I spent many hours reading online reviews and asking available boatyard personnel about finding the right nonskid. 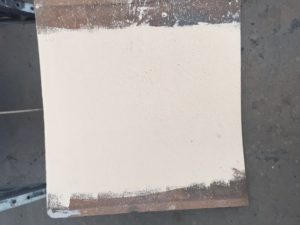 Finally I found KiwiGrip—a one-part, creamy, peanut-butter-like paint for which the rough texture is achieved by the proper use of its unique roller. I purchased the smallest quantity available and painted it on a discarded deck hatch. Once it was cured I hosed it down with water and tested it with my boat shoes on, in a deep-angled position. I ordered the larger quantity just after this trial proved satisfactory. 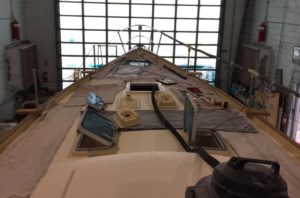 Puffin‘s deck after application of the nonskid

I have almost always underestimated the time and labor required to complete the masking prior to any paint job. And the worst proved to be the one before the interior painting. I tried to accomplish this by myself to save money, but by the third day I had to ask Glenn to give me a hand in order to avoid wasting a whole week. 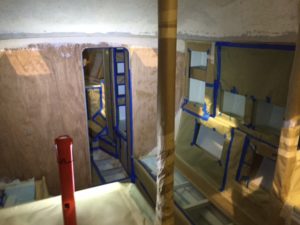 Prepping for interior painting is a tedious task 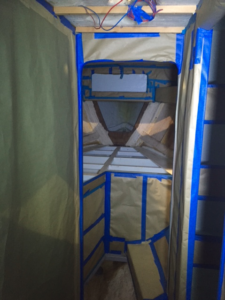 View into the bow after the marathon masking work

The interior painting is a unique challenge, especially if you opt to use the spray gun. We prepared for the worst aspects of it: the lack of breathable air, and the high risk of fire or explosion. The boatyard has a spark-proof fan, of course, and we kept it on the ground and pumped the air into the boat via a duct-sized air hose.

But Alexseal’s new interior paint pleasantly surprised us. It turned out it was water-based, which we discovered too late, and so our level of prep proved to have been a major overkill. Well, “do not take a gun in your hands if you are not afraid of it,” as my grandfather taught me.

The interior painting went pretty fast (at least compared to the marathon task of masking). Unfortunately the obstacle course of working in the floorless boat, with partial blindness due to the spraying, caused some running paint and missed spots. In addition, the wooden bulkheads sucked the paint in, and we did not have enough paint left for the second coat. The paint was otherwise great, like all of the other Alexseal products. Regrettably, our order for the second coat got postponed due to Hurricane Matthew, which forced them to shut down their factory in South Carolina.

This surprising break, though undesired, fortunately allowed me more time to visit the Annapolis Boat Show, where I had the chance to interact with potential sponsors and check out needed products, in person. I also spent time with two of my current sponsors (Sea Hawk Paints and Harken), and thanks to Mark Andres’ hospitality, the Sea Hawk stand became my “temporary slip” at the boat show. Also, one of my book readers recognized me at the show, and made my day introducing my book Kihivas to his son as a beacon for his prospective maritime profession. 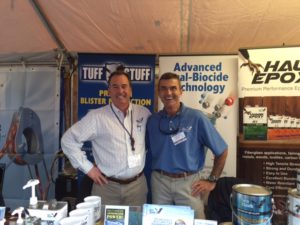 October 10—Columbus Day—found me with Puffin again, with recharged energy and motivation. With Glenn’s assistance I reinstalled the bowsprit, which had been repaired and reinforced in the skillful hands of my buddy Gary Bass in Florida. Then we also reinstalled all the lifeline stanchions, the pulpit, and the pushpit. 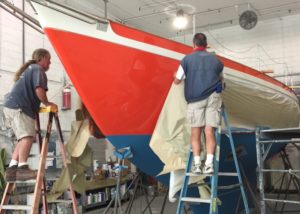 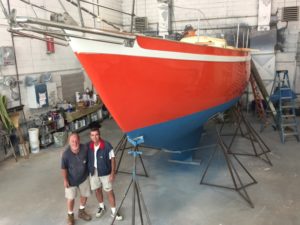 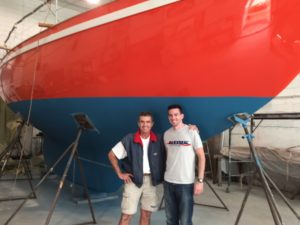 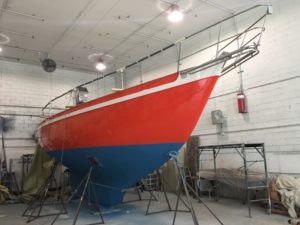 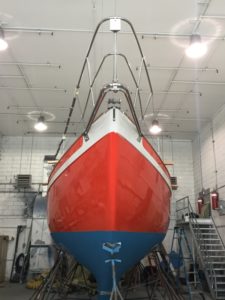 View of Puffin from the bow 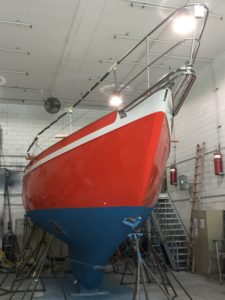 Puffin is looking so good, it was hard to narrow down the photos to include!

The interior paint was still on backorder, so I removed the largest deck hatch on the front deck, since it was not in compliance with either the requirements of common sense offshore sailing or the GGR rules. It was in decent shape, but had no outside-opening levers. Luckily I had a spare Lewmar hatch, but its base frame was flanged, not the required flat design. The solution was to cut it off with a table saw, in order to avoid having to purchase a new hatch (in the range of $600). There was no way to cut the flange off completely straight, so I used butyl tape for bedding in order to level the gaps of the uneven base. 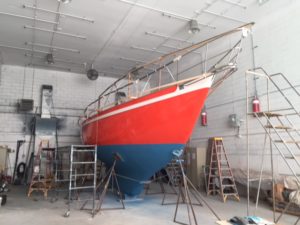 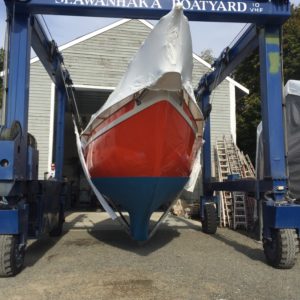 Puffin finally leaves the paint shop after her months-long “makeover” 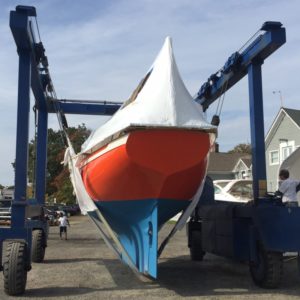 Puffin finally leaving the paint shop: a view from the stern

I decided to move Puffin outside and secure her winter storage spot, since the paint had still not come. We reinstalled the rudder when the travel lift picked up Puffin, and then she finally left the shop as a truly handsome-looking boat! It seemed that the sun got jealous, hiding behind rain clouds, and I appreciated my foresight for the timely shrink-wrapping that had already been completed inside the shop. 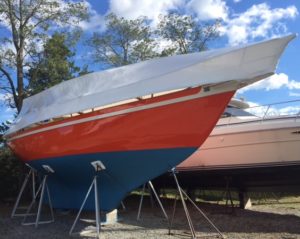 Puffin outside and ready for more work this winter! 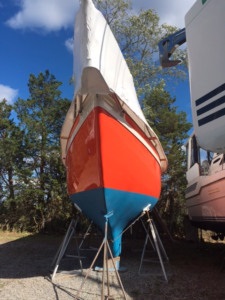 Puffin at her outside post: a view from the bow 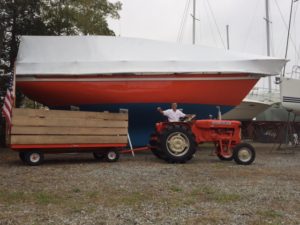 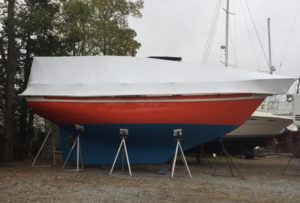 Puffin looks complete from here, but there is still much work to be done inside the belly of the beast